More than 30 years of archives

Founded in 1974, Antiquorum has been at the forefront of the success of the Royal Oak. Audemars Piguet’s Royal Oak has a long history on the auction market and incredible Royal Oak went under the hammer at Antiquorum. In 1992, Antiquorum auctioned its first Royal Oak timepieces in Geneva at Hotel des Bergues. Today, with more than 30 years of archives, Antiquorum has recorded nearly 1,000 Royal Oak watches presented for sale, of which nearly 8 out of 10 were sold, providing us with a very interesting reference on the evolution of this model’s value.

Audemars Piguet’s Royal Oak is one of the best success stories in contemporary design launched 50 years ago, back in 1972. Designed by Gerald Genta, the Royal Oak became an iconic wristwatch over the years for watch enthusiasts, collectors, and auctioneers. First, Audemars Piguet had approached Genta to design a sports watch which remained rare back then. By taking inspiration from vintage diving helmets and applying those visible screws to an octagonal bezel with an integrated bracelet, Genta sketched the design in one night—and the rest was history.

The Royal Oak was first introduced at Baselworld in 1972 and back then was commercialized for CHF 3’650 (around CHF 10’000 today) – first, the timepiece was not a total success as steel sports watches were not sought after but reaches today very high demand and is increasingly elusive.

“Our first 2022 auction took place the 18th of January in Monaco. For the 50th anniversary of the Royal Oak from Audemars Piguet, it was unthinkable not to present a piece to celebrate this anniversary, especially in Monaco, where Gerald Genta lived for many years: the brainchild of the esteemed Gerald Genta went under the hammer and was sold for EUR 260’000,” says Romain Rea, CEO of Antiquorum. 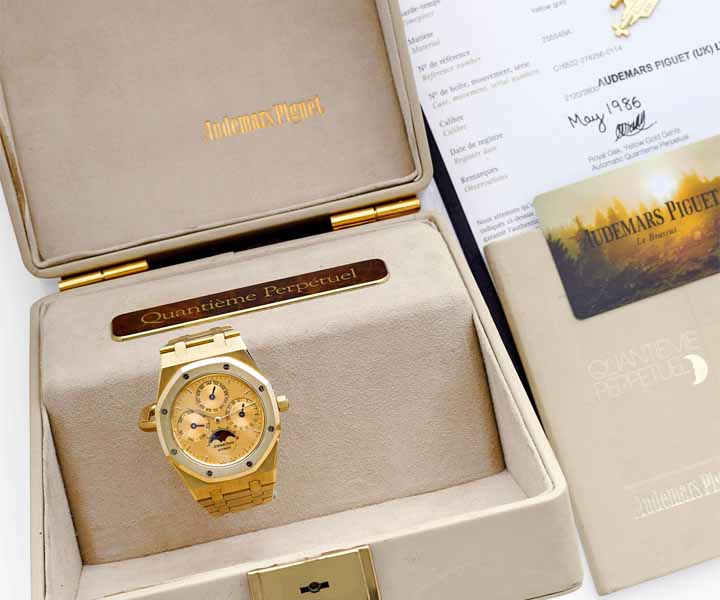 Audemars Piguet was first known for its perpetual calendar production in pocket watches, but its first-ever perpetual calendar wristwatch was manufactured in 1948. Only nine examples of its reference 5516 have been produced and very few followed due to the fastidious manufacturing processes at the time.

Back in December 2021 in Hong Kong, Antiquorum sold the most expensive Royal Oak Perpetual Calendar in Platinum and 18K Pink Gold on the auction market. Caliber 2120/2800 was launched by Audemars Piguet in 1978 at the height of the quartz crisis. 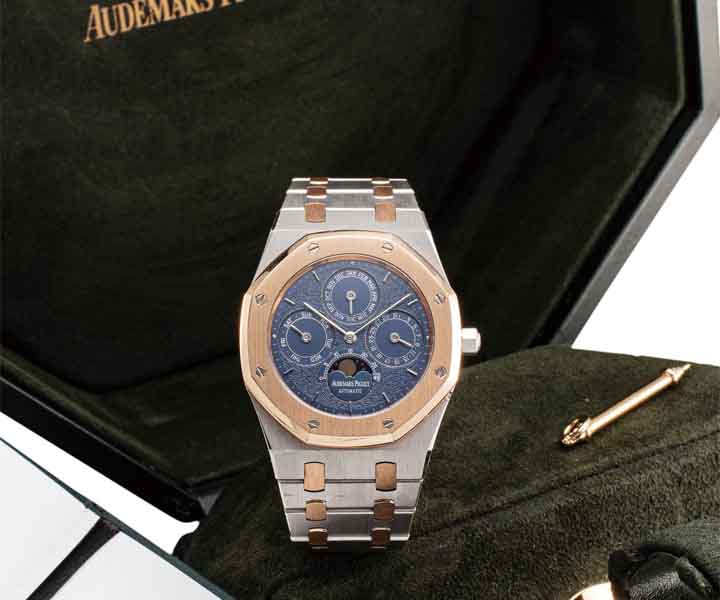 A new record was set by Antiquorum a few months ago, during the November auction week in Geneva. Antiquorum sold, over the higher estimation, this amazing and extremely rare, self- winding, stainless steel perpetual calendar wristwatch. 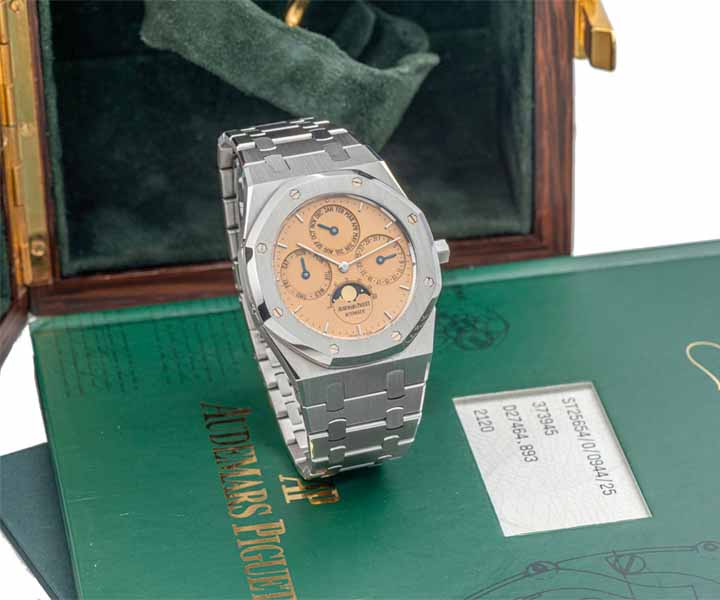 Audemars Piguet confirmed that this example was born with a salmon dial despite the wrong code on the original certificate. Completely overhauled, Audemars Piguet’s Royal Oak Perpetual Calendar, 1996 (Lot 453), was ready to be worn and enjoyed with probably one of the most striking dials (along with the Yves Klein) ever made on the perpetual calendar.

In 1972, Audemars Piguet introduced the Royal Oak with a first batch of 1,000 watches called the “A series” because of the letter A engraved on their case back. Two years later, additional series were produced under ref. 5204 with the letter A, B, C and D. This model (numbered 344) appears to have been created between the A and B series in 1976 and corresponds to Gerald Genta’s 1972 design. The case back is signed Royal Oak only, with no number.

Lovers of the Royal Oak will delight with the World Record set at Antiquorum Auction in Monaco last July 2021. This incredible Royal Oak is a historical timepiece as only few examples known, the first one to appear at auction with box and papers. 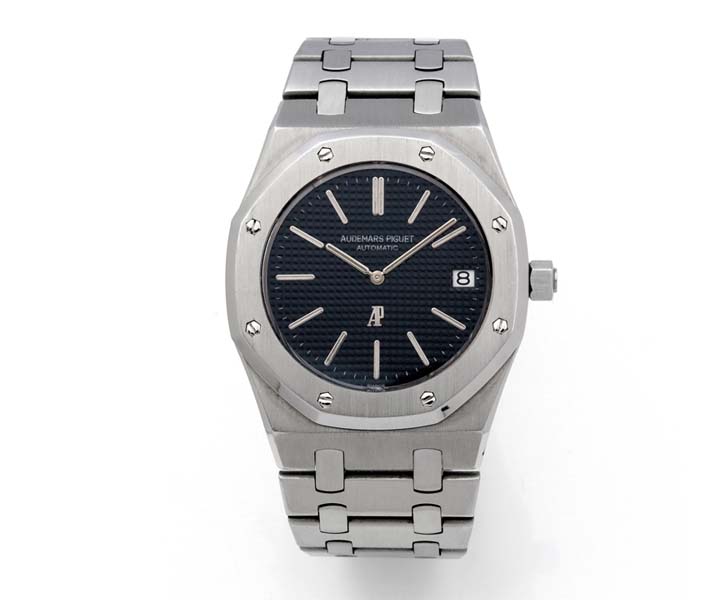 The watchmaking prowess of “skeletonization” does not leave collectors and watch enthusiasts indifferent. Revealing a part of the internal mechanism is a true horological art. Audemars Piguet, an expert in this field in the 1930s-1950s, used this skeletonization process on its Royal Oak collection, starting with a pendant version in 1981.

An extraordinary Royal Oak Platinum Skeleton wristwatch went under the hammer in October 1992, at Hotel des Bergues in Geneva. The timepiece was sold CHF 59’800 back in 1992 and is today estimated to CHF 200’000 according to Arnaud Tellier, Antiquorum expert and Director of Asia-Pacific. 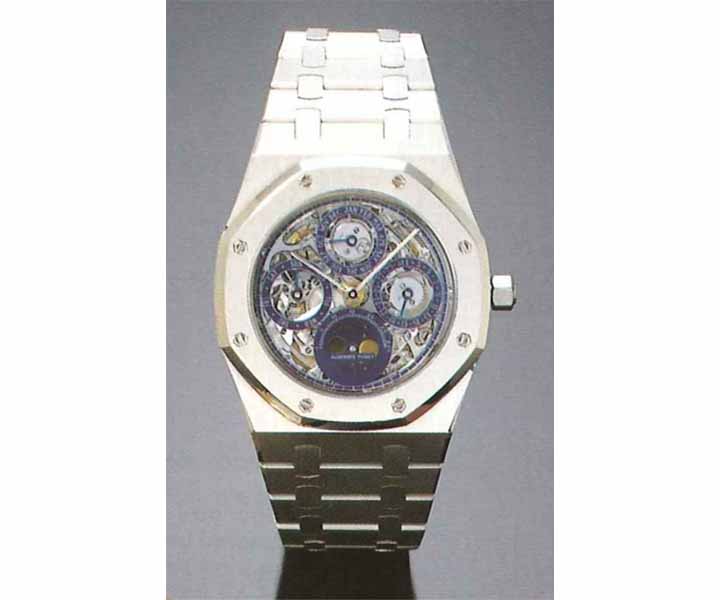 Nicknamed “Jumbo” by collectors, it owes this nickname to its tonneau-shaped case measuring 39mm, very large for the time. In November 2020, during the lockdown, Antiquorum sold the most expensive Royal Oak in yellow gold at that time. 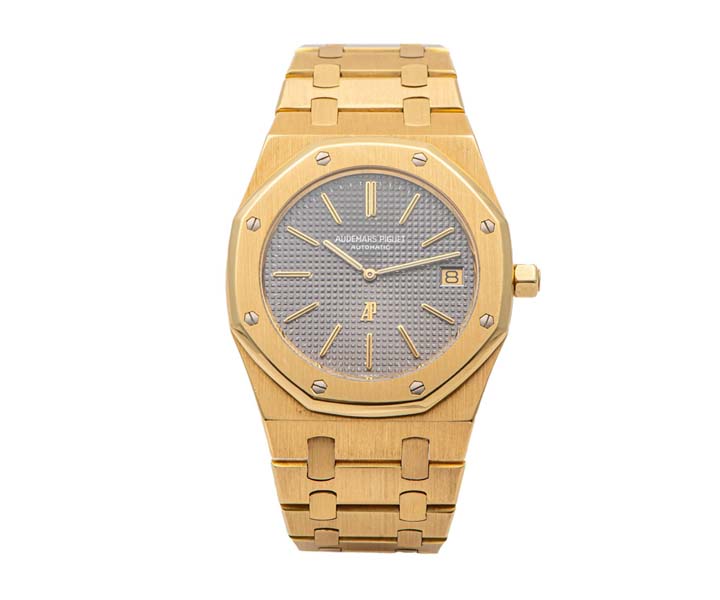 More than 50 Royal Oak models went under the hammer in 2012, during an exceptional auction at Grand Hotel de Kempinski in Geneva.

For collectors and auctioneers, the Audemars Piguet’s Royal Oak Jumbo “Serie A” n°88 is one of the oldest serial numbers to have been auctioned. A small anecdote also concerns the AP logo at 6 o’clock as only the A series and about half of the pieces produced for the B series display it.

Audemars Piguet’s Royal Oak Jumbo “Series A” n°88 (Lot 402) has been produced in 1972 in steel. In excellent overall original condition still with its Gay Freres bracelet dated 1.72 and combined with the lucky number 88, it is the perfect collector’s example.

When the mythic “Jumbo” was born 50 years ago, the timepiece was first criticized for its atypical shape and its 39mm diameter and has since become one of the most mystical watches in the world. For half a century, the Royal Oak has been manufactured through many iconic designs and today the Manufacture Audemars Piguet pays tribute to the timeless icon of 1972 with its new masterpiece, Royal Oak “Jumbo” extra-thin Ref. 16202.

Thanks to our archives we are able to draw the evolution of the Royal Oak. For the sake of relevance, it appeared more interesting to focus on the most emblematic Royal Oak reference which is the 5402 (all prices are with buyers’ premium included).

“Designed in 1971 by Gerald Genta and produced in 1972, the Royal Oak by Audemars Piguet is one of the most iconic contemporary sports chic models in the watchmaking world. Genta’s great intelligence is to insist on the thinness of the watch case: minimizing the space in the case is a feat that watchmakers no longer know how to do. The watch becomes a bracelet, like a piece of jewelry. This is what makes it a timeless object,” says Romain Rea, CEO of Antiquorum.

In 1972, Audemars Piguet introduced the Royal Oak with a first batch of 1’000 watches called “serie A” due to the letter A engraved on their caseback. Two years later, additional series were produced under the ref. 5402 with the letter A, B, C and D. Designed by the brilliant Gerald Genta, this timepiece bears witness to the 1970s and the emergence of the notion of the sport-luxury watch.

The A-series Royal Oak is powered by the ultra-thin AP caliber 2121, derived from Jaeger-LeCoultre’s legendary ultra-thin JLC 920 caliber movement. This is this model which is the most sought after. The series B and C have a slightly lower ranking on the auction market. There are two factors which can influence the price : the provenance, meaning the history of the wristwatch, and its condition, for instance the patina of the dial.

In 2008, a Royal Oak ref. 5402 was worth approximately 14/15.000 CHF. More than 50 Royal Oak models went under the hammer in 2012, during an exceptional auction celebrating the 40th anniversary of the Royal Oak, at Grand Hotel de Kempinski in Geneva. This key date, combined to a semi-thematic auction, led to an important “auction fever” featuring very important results such as 40.000 CHF for the lot 402, a Royal Oak Jumbo series A. Contrary to the A series, the B series was sold 15.000 CHF (lot 404). The following year, in 2013, the auction market went back at 16.000 CHF before starting a sustainable rise: 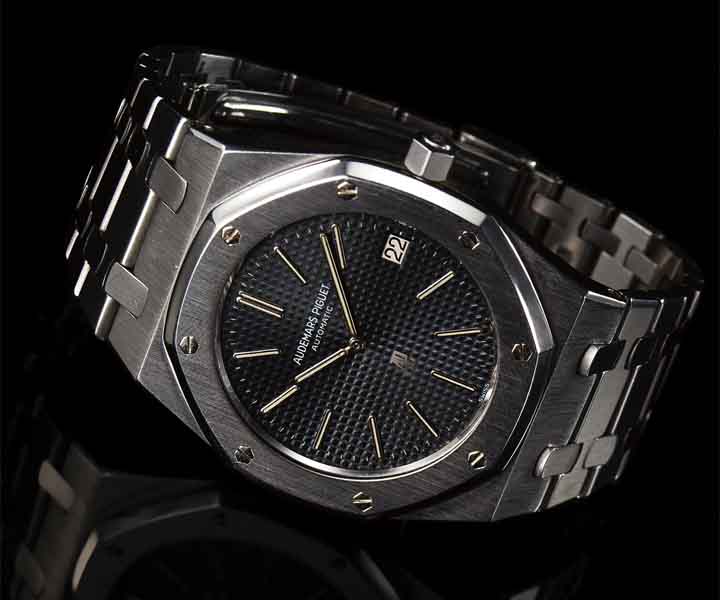 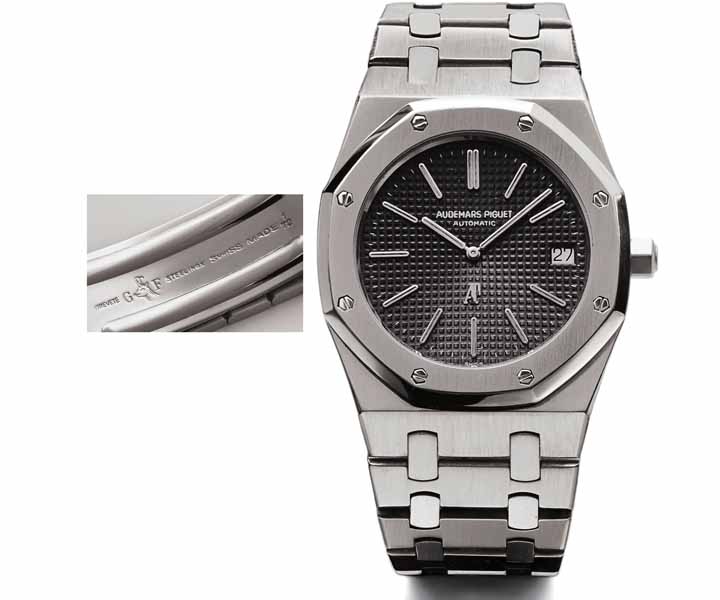 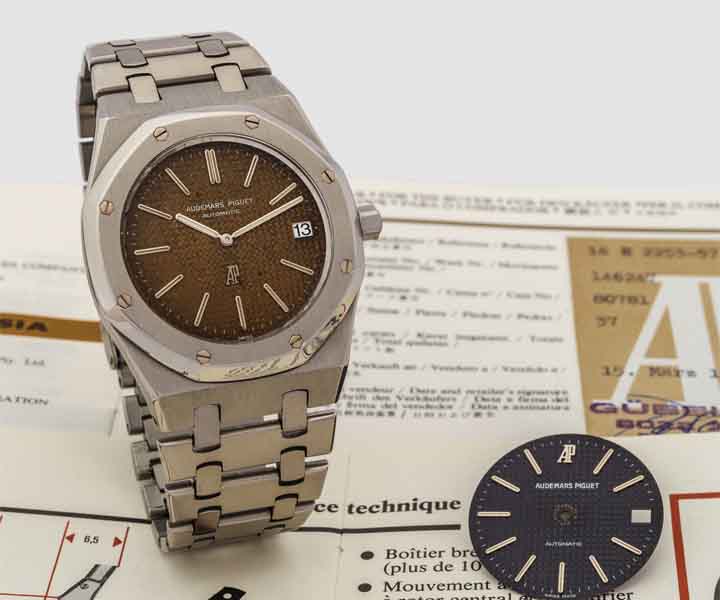 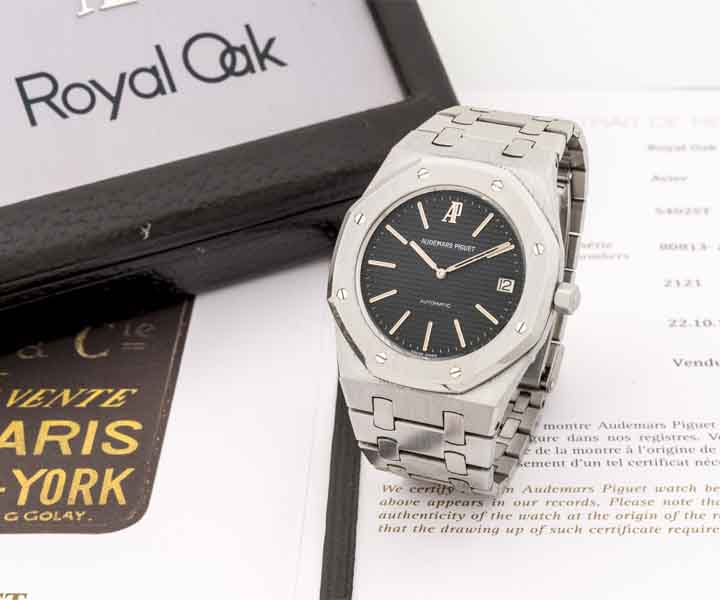 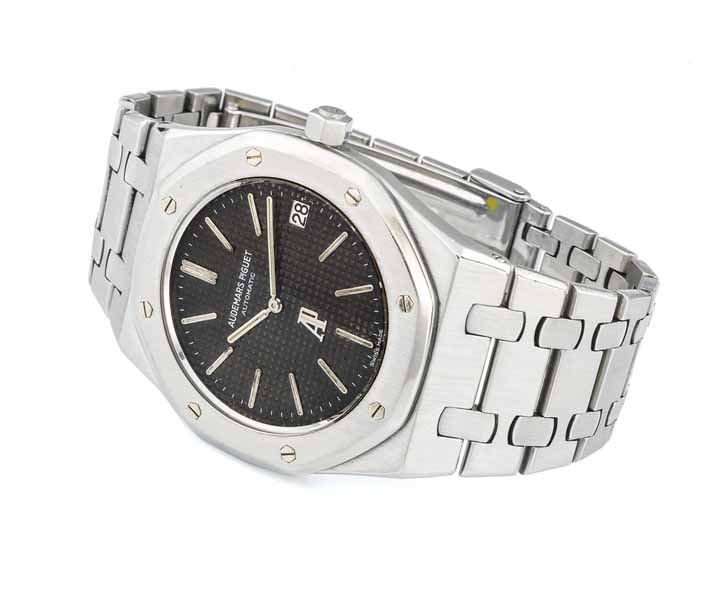 Then in 2021, approaching the 50th anniversary of the Royal Oak, the prices at auction went sky rocking. This enthusiasm is linked to the growing interest of collector for designer’s wristwatches, Gerald Genta being the most famous of all. The impressive results of our Monaco July auction, including one world record, were confirmed by the November Geneva auction. 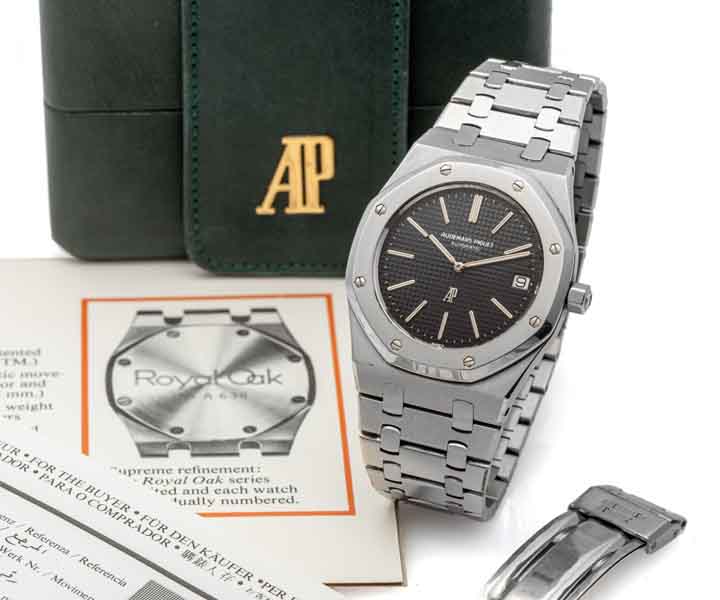 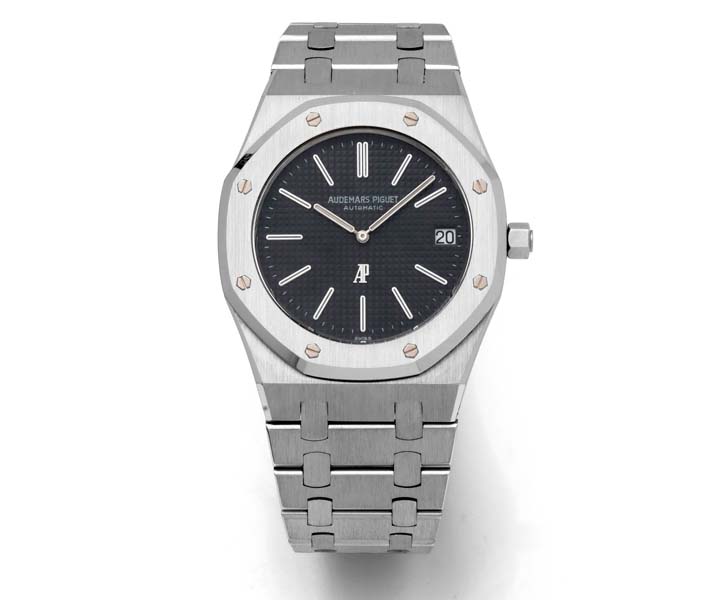 Designed in 1971 by Gerald Genta and launched in 1972, the Royal Oak by Audemars Piguet is oneof the most iconic model in the contemporary watchmaking industry. In 1972, Audemars Piguetintroduced the Royal Oak with a first batch of 1’000 watches called “serie A” due to the letterA engraved on their caseback. Two years later, additional series were produced under the ref.5204 with the letter A, B, C and D. This model (numbered 344) appears to have been created inbetweenseries A and B in 1976 and corresponds to the 1972 design by Gerald Genta. The casebackis only signed Royal Oak with no number. It was sold on September 3rd, 1976 to the original ownerwho consigned it for this auction. In excellent condition, this is the first time a watch from this“intermediatory series” has appeares at auction. 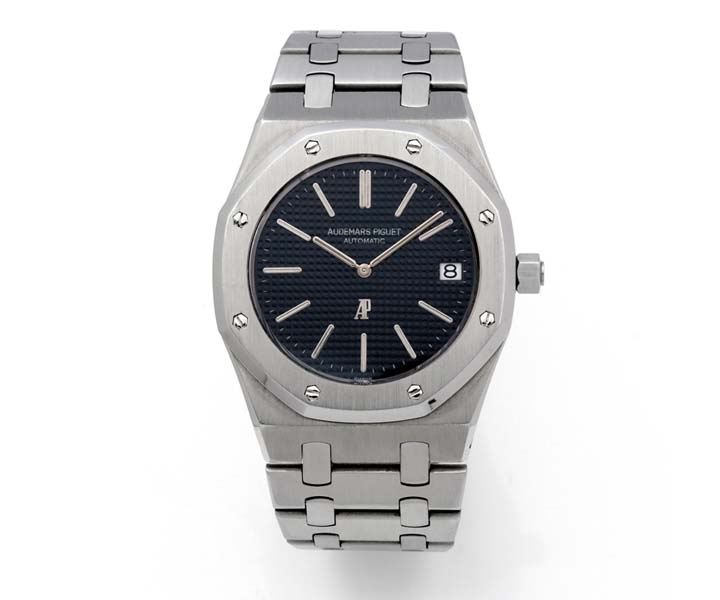 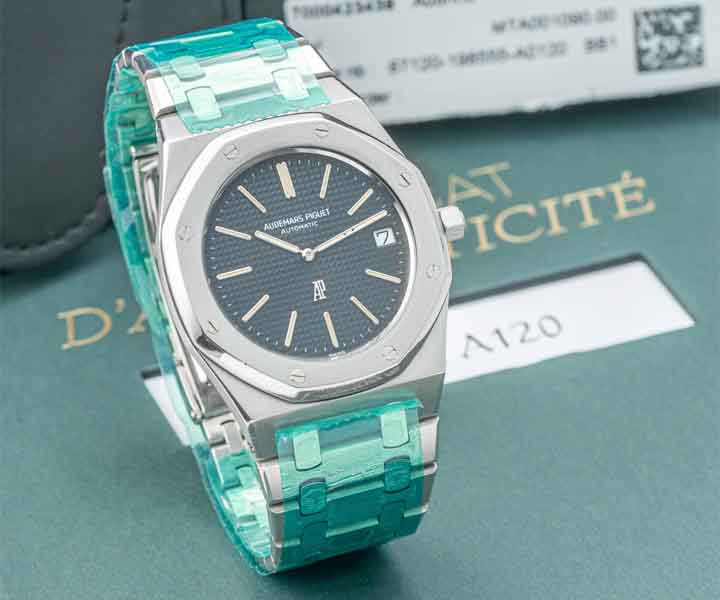 2022 being the 50th anniversary of the Royal Oak, there is no doubt the prices will continue their rise and our Monaco auction in January seemed to confirm this path : 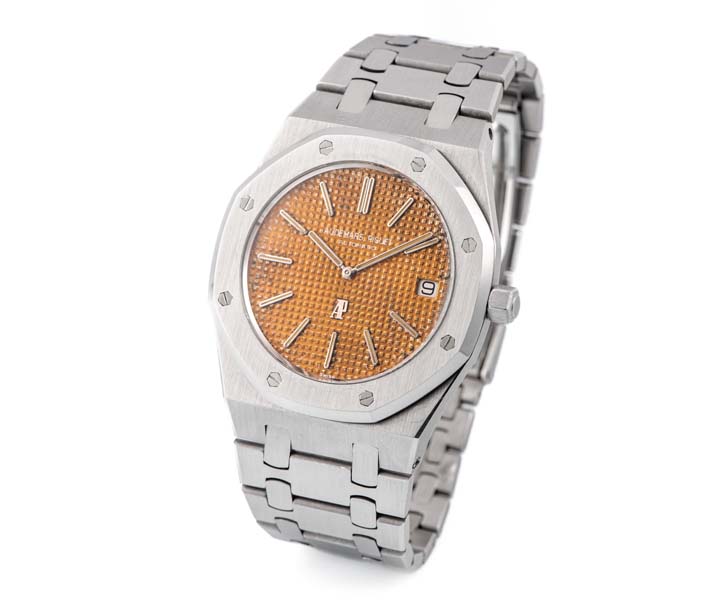