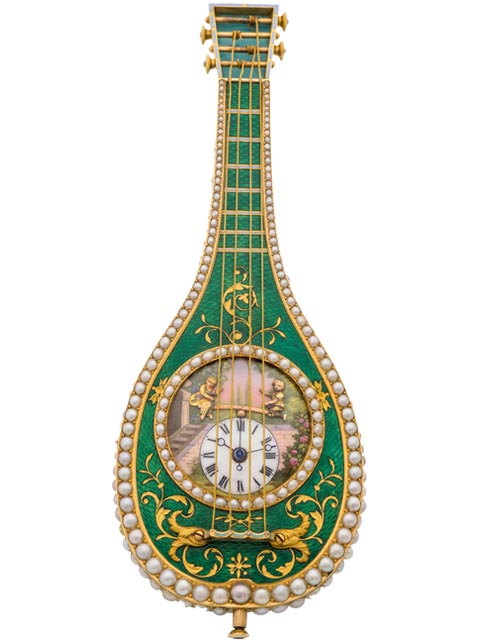 Magnicent and extremely rare 18K gold and enamel pearl- set quarter-repeating musical automaton watch, in the form of a Neapolitan mandolin, playing every hour or at will, made for the oriental market.
C. Two-body, covered with translucent green enamel over inqué with gold foliage on the soundboard; pearl-set sound- hole tted with the watch dial and automaton scene; the back formed of six ribs in en suite green enamel over a geometrical pattern; the front of the neck decorated with light blue enamel frets; gold knurled pegs; the front set with nely graduated split pearls on an applied gold frame; the edge decorated en suite with graduated half-pearls; gold twisted-rope strings; push- button at the edge of the soundboard to activate the quarter- repeating; once the lid is opened, we discovered a polished gold and enamel hinging cuvette (back-dome) decorated with translucent imperial blue owers; on its side, the music / silence lever; the fausse-plaques (plates) surrounding the gold cuvette (back-dome), with inside the movement, engraved with ribbon owers enamelled in royal blue champlevé.

Movement punched « P M » inside a horizontal lozenge on the dial plate and numbered on several places. DIM. 128 x 50 mm.

The magni cent watch of fantasy illustrated here is one of only four known, created circa 1820 by Piguet & Meylan of Geneva, two other are kept in private collections (Patek Philippe Museum and Hans Wilsdorf Foundation, Montres Rolex S.A.; both in Geneva), … the last one also available in this sale!

They are unusually large, and apart from the watch, they also feature automatons and play music. A fundamental di erence between these four pieces and most fantasy watches is that these do not conceal the timepiece, but feature it as its most important function, just as a classic watch. The rare size permits even more luxurious decorations, this piece having polychrome champlevé enamel and translucent enamel on guilloché, natural pearls, gold paillons, re ned and delicate engraving, and such details, making this object extremely rare and desirable. The automaton, which represents two children on a see-saw, delicately beats time to the music. The placement and combination of the colours used for these exquisite enamels leads us to believe that this mandolin was specially made for the Chinese Emperor and his court, where most of Piguet & Meylan’s nest timepieces and objects were destined.

The Neapolitan mandolin comes from the lute family, from which it inherited its characteristic gourd-shape. Its history is quite long, its form, as we know it today, dating back to Florence around 1600. Its sweet notes and particular quality made
it a huge success in Italy, and especially in the region around Naples. In England, since the sound was very similar to that of the virginal, the mandolin soon became the basis of all young women’s musical education. Many have unjustly labelled the mandolin an instrument of Italian folklore, when instead it has been featured as the solo instrument of choice of Vivaldi, in some of the works of Beethoven, Pergolesi, Verdi, Mahler, Stravinsky, and even in Mozart’s Don Giovanni opera. This instrument was a perfect re ection of the time – a time when Jean-Jacques Rousseau (originally of Geneva) in France and Sturm und Drang in Germany created a philosophical movement of romanticism as a reaction or denial of the classicism of the 16th century. In Geneva the goldsmiths and watchmakers were inspired by what the mandolin symbolised, and thanks to its gracious form, they miniaturised it, creating tiny masterpieces in precious metals, lavish with multicoloured enamels and oriental pearls, and such, transforming this instrument into jewels of fantasy, messengers of love, which discreetly adorned the breasts of their beloved. Watchmakers, such as Piguet & Capt, the Achards, the Esquivillons, the Bordiers, and Rémond, who were goldsmiths as well, were specialized in reproducing exotic shapes, such as musical instruments, fruits, owers, good luck animals, asks and objects of everyday life, into precious jewels destined to the most re ned customers of Europe or foreign markets. The bulging shape of the mandolin lent it perfectly to hidden treasures- a vinaigrette, a concealed watch, or even a minute musical mechanism, whose pins strum the vibrating steel blades, imitating not only the shape of the mandolin but its sweet sound as well.

Similar objects (only four Neapolitan mandolin are known to exist)

Alfred Chapuis (1880-1958) mentions (1944, p. 116) that Neapolitan mandolins were in the Bernard Franck collections in Paris, Adolf Iklé in St. Gallen and Carl Marfels in Berlin. Without more information, it is impossible to know who owned what at the end of the 19th century and at the beginning of the 20th century.

Bernard Franck (1824-1924) in Paris was an industrialist at the head of a family factory of military equipment and a great collector especially of historical memories. His success in business allowed him to become an inveterate collector since 1875. He published a book in 1902 regarding its collection of carnets de bal (Paris, 1902, 62 pp., 64 pl.). His collections were sold in more of fteen public sales, mostly anonymous, some under its name, notably in 1931 (Etude Fernand Lair Dubreuil & Henri Baudoin, Paris, Galeries Georges Petit: May 20-21-22, 1931,

Adolf Iklé-Steinlin (1852-1923) in St. Gallen ran the Iklé Frères Company, manufacture and export of high-quality mechanical embroideries, which revived the local industry of the embroidery and contributed to its international fame. Numismatist, collector of Swiss coins and medals, he published with Emil Hahn (1866-1946) a catalogue of species from the city of St. Gallen. In 1911, he sold an exceptional set of 578 gold coins. His collection, scattered in 1928, included notably St. Gallen coins and many rarities. He also owned a large collection of antique horology (cf.: Chapuis, Alfred, “Les collections Adolf Iklé à Saint-Gall”, in La Fédération Horlogère Suisse, 58th year, No. 18, May 6, 1943, pp. 299-303)

Carl Marfels (1854-1929) was in Berlin an antiquarian specialising in antique horology; he has sold a lot in America, especially to John Pierpont Morgan (1837-1913). He has published several catalogues of sales of his collection objects.

Harry H. Blum was the owner of Blum’s Vogue, an upscale woman’s store on South Michigan Avenue in Chicago.

S. J. Phillips Ltd in London is a well-known dealer in ne antique jewels and silver, box and objects of vertu, since the 19th century.

Piguet & Meylan (active between 1811 and 1828)
Both originally from the village of Le Chenit in the Vallée de Joux, Isaac- Daniel Piguet (1775-1841) and Philippe-Samuel Meylan (1772-1845) came to Geneva as young men, and formed a partnership, which lasted from 1811 to 1828. The company specialised in elaborate and beautifully decorated musical watches, including skeleton and automaton watches, and mechanical animals. The rm was established rue Jean Jacques Rousseau 45 in Geneva. After their association came to an end, both Piguet and Meylan continued for some time to work with their sons.

Philippe-Samuel Meylan (1772-1845)
Born on February 15, 1772, in Bas-du-Chenit in the Vallée de Joux. At 20 years of age, Philippe-Samuel Meylan came to Geneva where he was a master worker for the Godemar brothers. He met another watchmaker from his native region, Isaac-Daniel Piguet (1775-1841), and they entered into partnership, founding the Piguet & Meylan rm, which was to last from 1811 to 1828. It specialized in minute cadratures, musical watches, skeleton and automaton watches. Meylan is also credited with the invention of the Bagnolet calibre. After Piguet & Meylan was dissolved, he continued to work with his sons François and Auguste. Philippe-Samuel Meylan died in Geneva in 1845.