MONACO (July 17th, 2019) — After an outstanding three days of exhibition at the impressive Salle Empire inside the iconic Hotel de Paris of Monaco, Antiquorum, the horological auction house for more than four decades, announces a remarkable result for its first auction as a newly Monegasque entity.

For the first time of its history, the heart of Monaco Principality hosted a horological auction in the Hôtel de Paris. from Sunday July 14th to Tuesday July 16th, Antiquorum unveiled to the lucky few present in the Rivera summer time a curated collection gathering the most sought-after timekeepers.
The auction took place on the 16th at 4pm in a full room. During five intense hours, the man behind the hammer: Mr Romain Réa, expert & CEO of Antiquorum, ran through the 340 lots with passion.
The strength of Patek Philippe watches was once again proven with the remarkable Lot 342, a splendid Patek Philippe chronograph gifted in 1938 by the noble Count Jean Eugène de Chikoff to Dr. Lucien Jacoberger to thank him for saving the life of his daughter Eugenia. This rare watch with its original box and certificate concealed by descendance of the original owner reached 247’000 EURO.
The collectible brand tends to also seduce collectors in its singular versions; it’s the case for lot 282 the probably unique steel Aquanaut REF 5060A-0001with blue dial and red hand sold for 214’500 EURO. Part of the atypical Patek Phillip timekeepers, Antiquorum also highlights lots 48, the only one known
24-hour Patek Philippe pocket watch made in the 1930’s sold for 36’500 EURO; lot 226 Ref 4226 in
Lapis-Lazuli (sold for 7’410 EURO), lot 232 the ref 3466 Calatrava signed Haussman & Co in a unusual steel case (sold for 26’000 EURO).

Out of the top ten lots auctioned last Tuesday, half of them came from Rolex which continues to be highly appealing for collectors. such as the reference 8171 “Padellone” (lot 339), hammered for

208’000 EURO, is one of the most sought-after vintage Rolex watch on the market due to its rarity and elegance; another Rolex “Padellone” in yellow gold this time yield 104’000 Euro.

Antiquorum also would like to highlight the Vacheron Constantin Patrimony minute repeater, perpetual calendar in titanium, lot 150 sold for 153’400 EURO and the Vacheron Constantin “Sputnik Arts and Carfts” in white gold which captured the heart of a collector for 84’500 EURO.
Antiquorum, the world’s first horological auction house has been proud to entrust once again for this auction an exceptional illustration of watchmaking history as well as contemporary know-how of modern manufacturers. The success of this auction that took place in the mythical Hotel de Paris is a flying start and strong symbol for the establishment of the auction house in Monaco this year, a premiere since its creation in 1974, in Geneva Switzerland. 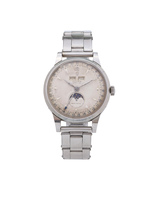